Antibiotic resistance is a global problem: all over the world, more and more bacteria are becoming resistant, and an increasing number of people are dying from infections it used to be possible to treat. International cooperation has to be stepped up to preserve the effectiveness of antibiotics in the long term. With this goal, more than 200 representatives from over 40 nations met for the 2nd Ministerial Conference on Antimicrobial Resistance in the Netherlands.

The effectiveness of antibiotics as life-saving drugs has to be preserved for the long term. For this reason, Switzerland is actively involved in the World Health Organization (WHO) strategy to stem antibiotic resistances. Following the first ministerial conference on this issue five years ago, Switzerland, like many other countries all over the world, drew up an action plan to combat resistance: StAR, the Swiss Strategy on Antibiotic Resistance.

The goal of this year’s conference was to bring participating countries closer together. Partnerships were offered to enable mutual support in the fight against antibiotic resistance, and accelerate and increase the effectiveness of measures to combat resistance. The Swiss Federal Food Safety and Veterinary Office (FSVO) was open to concrete support measures.

At the conference the World Health Organization (WHO), the UN’s Food and Agriculture Organization (FAO) and the World Organisation for Animal Health (OIE) announced the establishment of a multipartner trust fund. The fund is designed to support low and medium-income countries with the implementation of their antibiotic resistance policy. The funds are to be used for monitoring systems, educational programmes on the proper use of antibiotics, and for the development of joint programmes for human and animal healthcare. The Netherlands has already paid USD 5 million into the fund.

Switzerland is a partner in the Global Partnership for Research and Development on Antibiotics (GARDP). The GARDP works on a global level to ensure that new antibiotics are developed and existing substances with antimicrobial effects are made ready for market. Switzerland has decided to extend its financial support for the GARDP’s efforts to develop new antibiotics by two years.

Reducing the use of antibiotics

Antibiotic resistance builds up wherever antibiotics are used. For this reason they should only be used if absolutely necessary. This applies to both animal and human medicine. According to a recent study from Wageningen University & Research in the Netherlands, reducing the use of antibiotics in animal husbandry did not have any negative effects on production levels and the economic performance of farmers holding livestock (see link: Antibiotic reduction: no negative effect on competitive position of Dutch farmers).

Third Ministerial Conference on Antimicrobial Resistance to be held in Oman

The conference in Noordwijk (the Netherlands), designed to underscore the importance of monitoring antibiotic resistance worldwide, was attended by more than 200 representatives from over 40 nations as well as high-ranking WHO, OIE and FAO officials. The third ministerial conference, already being planned, will take place in Oman in 2021. 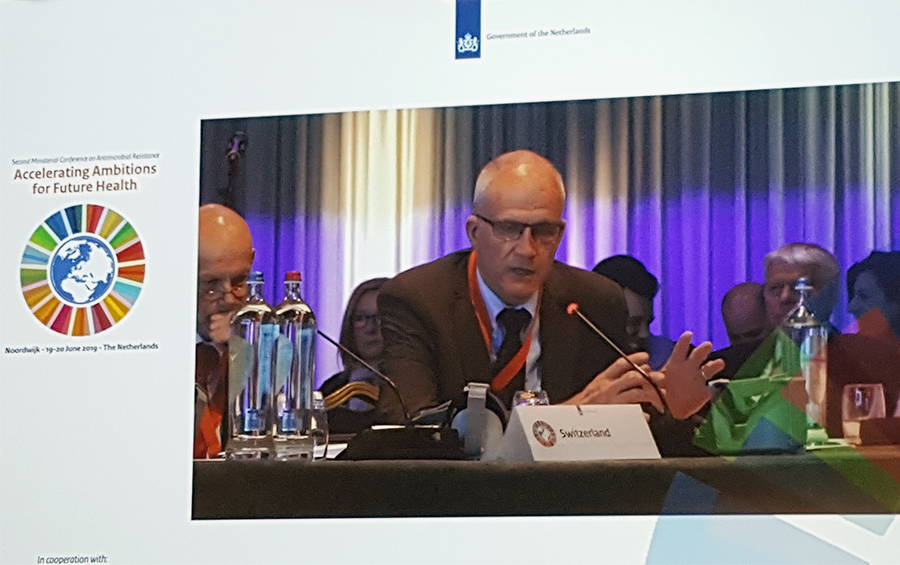